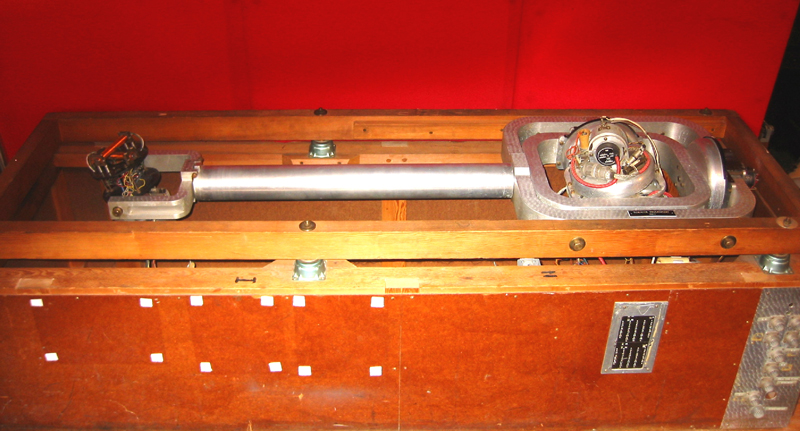 The development of a three-component airborne magnetometer system in Canada began in 1946 as a project sponsored by the Subcommittee on Navigation of the Associate Committee on Aeronautical Research of the National Research Council of Canada. Several organizations were involved in the project, including the Dominion Observatory, the Department of Defence, and the University of Toronto. The first prototype system was flown in 1950.

The unit on display here was designed by P.H. Serson, S.Z. Mack and K. Whitham and was built at the Dominion Observatory between 1951 and 1955. The first experimental flights took place in 1953 with the magnetometer installed onboard a RCAF Northstar. In 1955, the instrument was used to carry out a systematic magnetic survey of Manitoba, Saskatchewan and Alberta. Six additional surveys were flown between 1957 and 1963; all of Canada was covered, and the survey of 1958 circumnavigated the Pacific Rim. All these surveys were carried out with the instrument installed on civilian aircraft.

Most of the components used in the construction of the instrument were manufactured by staff of the Department of Mines and Technical Surveys. For example, the yoke, pipe, gimbals and slip-rings (which contain pure silver) were cast at the Mines Branch. These and most other components were machined by Ernie Saunders and Chris Christensen in the Dominion Observatory’s own machine shop.

The magnetometer platform consists of two parts. The assembly on the right is a stabilizer system that keeps the platform horizontal, independent of the rolling and pitching of the aircraft, and furnishes a reference direction of known azimuth. This was accomplished through a series of servo-motors, gyroscopes and accelerometers. The assembly on the left is the magnetic field detector, consisting of three orthogonal coils, one measuring the field along the axis of the pipe, and the third measuring the field at right angles to the other two. Each sensor was operating by maintaining it at zero field by the application of an electric current flowing in a solenoid around it. The current is therefore proportional to the magnetic field component along the axis of the sensor.

Both the stabilizer platform and the magnetometer sensor required complex electronic control systems. These no longer exist, but are shown in the accompanying photo.