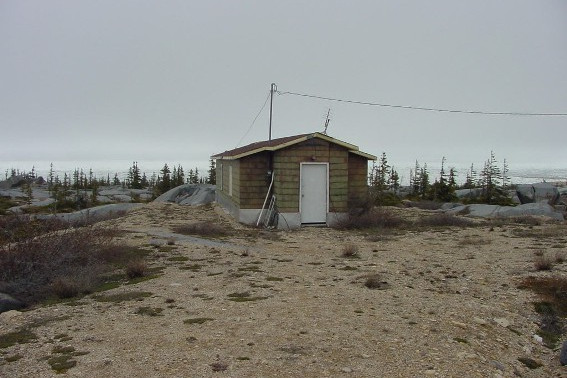 Photographic recording of the geomagnetic field variations was begun at Fort Churchill, Manitoba in 1957 by the Defence Research Northern Laboratory of the Defence Research Board, primarily to provide information for the Fort Churchill Rocket Program. In July, 1965 the operation of the Churchill Research Range, including the Geomagnetic Observatory, was taken over by the National Research Council of Canada. However, funding for the operation of the Geomagnetic Observatory was provided by the Dominion Observatory, Department of Mines and Technical Surveys (now the Geological Survey of Canada, Natural Resources Canada). Title was transferred to the department in 1972. Digital recordings of the geomagnetic field were begun with the Earth Physics Branch's AMOS Mk I in September, 1971. The aging AMOS Mk I was replaced by the AMOS Mk III late in November, 1981. In turn, the AMOS Mk III was replaced by the INTERMAGNET compliant CANMOS in April, 1991.

Until 1965 there was no instrumentation for regular absolute observations. Prior to 1965, baselines and scale values of the magnetograms were determined by personnel of the Dominion Observatory on the average of once or twice a year. Owing to inadequate absolute control, no data were published for the years 1957 to 1963. A program of regular absolute observations was begun in June, 1965.

The magnetic recording building was constructed in 1957. It is about 1.2 km north of the airfield, in a region characterized by sedimentary and volcanic rocks of Precambrian age. A total force survey carried out in 1963 has shown that the area is reasonably magnetically flat with no total force anomalies greater than 30 nT within 45 m of the site. The building is 6.5 m by 4.5 m, of non-magnetic construction and is situated with its long axis 4.2 deg. east of the geographic meridian. A concrete floor poured directly over bedrock eliminated the need for instrument piers. A building for the taking of absolute observations was constructed in November, 1964 about 42 m west of the recording building. The absolute building is 12 m by 5 m and non-magnetic throughout. The floor consists of a concrete slab poured directly on bedrock. Presently, all geomagnetic instrumentation is contained in the absolute building. The older recording building has been loaned the Canadian Space Agency for housing their instrumentation for the MARIA network.