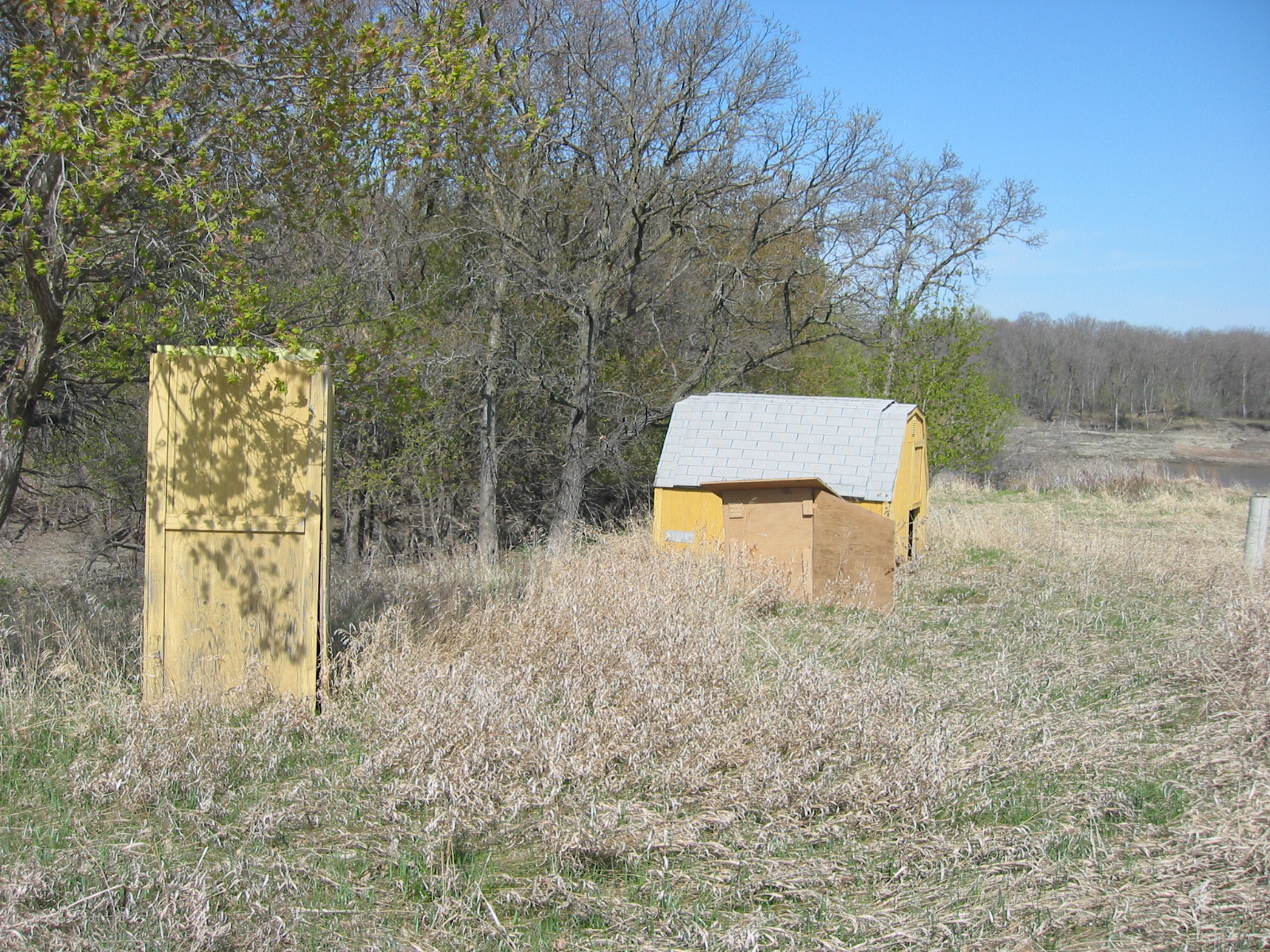 The site (49 deg. 48 min. North, 264 deg. 45 min. East) was within the confines of Whiteshell Provincial Park some 160 km east of Winnipeg. The area has exposed Archaean greenstone bedrock.

Although no attempt was made to maintain Whiteshell as a standard observatory, the data for other than problem periods were routinely edited and reconstituted magnetograms of the digital data were routinely sent to World Data Centre A.

To avoid the expense of a non-magnetic building of the standard observatory type (e.g. Cambridge Bay), the sensors for the observatory instruments were housed in individual prefabricated shelters. Electronic consoles and auxiliary equipments were housed in an existing building some 30 m southeast of the sensors. Concrete piers for the sensors and the D & I theodolite were poured onto bedrock. The dimensions of the shelters were as follows:

The shelters were constructed of plywood and well insulated. Aluminium nails and brass hardware were used in the construction. Separation between the shelters was about 5 m.

As the cost of a monolithic observatory building became too great in an era of shrinking governmental budgets, this prototype for a geomagnetic observatory became the template for the Canadian Magnetic Observatory Network whenever a new observatory was to be established.

In early 1979, the time required for regular service trips to Whiteshell, by a qualified person from the University of Manitoba in Winnipeg, became to great a burden. Accordingly discussions were begun for a move of the Whiteshell instruments to a site closer to the University of Manitoba campus. Agreement was reached in May, 1980 and construction of instrument shelters, etc. at Glenlea according to the Whiteshell paradigm was completed in August of the same year.

A site within the confines of the U. of M.'s experimental farm, some 30 km south of the campus, was selected. The site is established on gently rising land about 70 m from the Red River. The bedrock is overlain to a depth of 20 m by Upper Ordovician sediments, a legacy of Lake Agassiz, formed after the last North American ice age.

Glenlea Observatory is an assembly of a trailer for the electronic consoles and auxiliary equipment, a scattering of shelters to house the various sensors and a shelter for the D & I theodolite. The shelters were fabricated of plywood, insulated and put together with non-magnetic hardware. Piers are sunk 4 m into the sed- iments. The sensor and D & I theodolite enclosures are separated by 7 m from each other and 60 m from the instrument trailer. The complex is serviced by underground ducts in which are the power and signal cables. Whiteshell was replaced by Glenlea on 26 September, 1980.

Three climatological disasters have struck the Glenlea Geophysical Observatory. In the summer of 1995, the trailer in which housed the accessory electronic equipment was rolled over by tornado-like winds. In May, 1996 the recording sensors were inundated by the flood waters of the nearby Red River. The flooding was repeated in May, 1997. Therefore, during the summer of 1997, a decision was made to stop the making of absolute D & I observations until the Glenlea Geomagnetic Observatory is moved to a more suitable location. Consequently, Glenlea Geomagnetic Observatory ceased to exist in May, 1997. The Glenlea geomagnetic variation station was relocated to Brandon Geophysical Observatory in 2007.