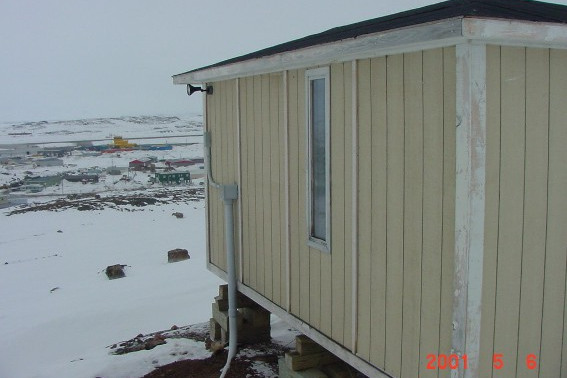 Consideration was given to building a magnetic observatory in Iqaluit in the middle of 1988. However, it was not until August, 1990 that discussions were held with officials from Arctic College, Nunatta Campus, as to establishing an observatory as a joint project. In preparation for the construction, the Municipality of Iqaluit granted in December, 1990, rights to a parcel of land to the Natural Resources Canada (NRCan) for recording the variations in the geomagnetic field. Towards the end of March, 1994 a formal Memorandum of Understanding was signed by the NRCan and the Arctic College towards the establishment of a magnetic observatory in Iqaluit. The Understanding committed the NRcan to bear the cost of the material and the Arctic College to providing the labour for the construction.

The site chosen for the new observatory is on the side of a hill, 1.4 km to the north from the centre of Iqaluit and 400 m to north of the Arctic College. The area has significant exposures of Archaean gneiss. Unfortunately, a preliminary Total Force survey of the site showed that F variations could be as high as 1400 nT over 30 m. This amount of magnetic relief is prevalent in Iqaluit.

The apprentice carpenters from the Arctic College completed the construction of an Absolute Building ( 4.8 m by 2.4 m by 2.4 m), the Service Building ( 4.8 m by 3.6 m by 2.4 m) and the various sensor shelters during the summer of 1994. The two buildings and the sensor shelters are scattered over the site in the same fashion as that for other Canadian observatories such as Yellowknife. The Observatory was furnished with an INTERMAGNET compliant CANMOS in October, 1994. However, various instrumental and operational difficulties precluded the routine collection of data until January, 1995.

During 1995 it became apparent that problems existed within the data as the difference between the calculated F from the fluxgate and the measured F from the total force magnetometer varied. This was especially noticeable during periods of magnetic disturbances. The problem persisted even though the various magnetometers were replaced during 1995. A re-examination of the earlier F survey showed that the F sensor and the 3-component fluxgate sensor were situated on either side of a substantial F anomaly. It was therefore decided to move the sensors to an area of lower magnetic relief. This was done in August, 1996 and resulted in a substantial reduction in the problem.