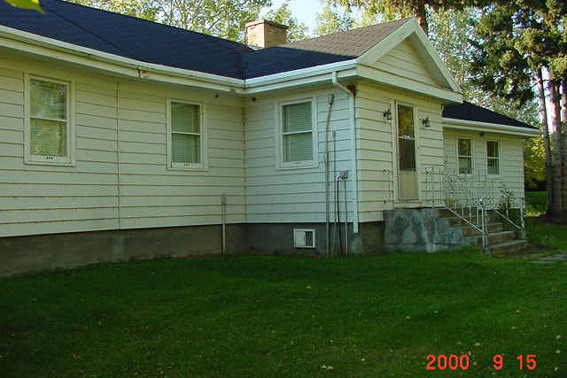 Meanook Geomagnetic Observatory was established in July, 1916. The site is 136 km north of the city of Edmonton, Alberta and 18 km south of the town of Athabasca.

The Observatory is located on the top of the plain to the west of Tawatinaw valley. The site is underlain by Upper Cretaceous sedimentary deposits to a depth of 2 km. The nearest railway passes through the bottom of the valley about 5 km southeast of the Observatory.

A recording basement to house Kew-type variometers was added to the original building in 1927. The absolute building and the heating system were renovated during 1940. In 1941 an annex to the basement recording room was constructed to house the two sets of LaCour variometers which had been located in a temporary hut since the International Polar Year (1932-1933). In 1951 the absolute instruments and LaCour variometers were transferred to a new magnetic observatory building. In 1955 an additional 215 hectares of land adjacent to the Observatory were purchased. Ground electrodes were established 1.6 km apart in north-south and east-west directions for the study of telluric currents.

Meanook Observatory was considerably expanded for the International Geophysical Year (1957-1958). In addition to the standard magnetic observatory, an auroral all-sky camera, an auroral intensity recorder, a patrol spectrograph a vertical incidence sounder, a fixed ionosphere backscatter sounder, a riometer and a telluric recorder were also in operation at the station. During the second International Polar Year the station consisted of only two buildings on a one hectare site; in 1957 the station possessed 15 buildings on a protected area of 219 hectares. Land and buildings no longer required for Earth Physics Branch (now part of the Geological Survey of Canada) programs were transferred to the Department of Public Works on 1 July, 1976. The 1951 magnetic observatory building and the old absolute building which still housed the optical variograph (RUSKA) were retained for the operation of the Meanook Geomagnetic Observatory. The old absolute building was demolished in 1988. The remaining building is centred in a 213 m by 213 m area reserved exclusively for the use of the Geomagnetic Program. The excess land is now in use by the Meanook Biological Research Station, University of Alberta.

Only declination was recorded from 1916 to August 1927, at which time horizontal force and declination differential photographic recorders of the Kew-type were installed. A vertical force magnetometer was installed in September, 1931. Standard and low sensitivity LaCour recorders replaced the Kew variometers in 1933. RUSKA variometers were installed in May, 1961 in the basement of the old absolute building. The RUSKA variometers were adopted as the standard recorders on 1 October, 1963. The production of optically recorded magnetograms was discontinued on 31 July, 1979.