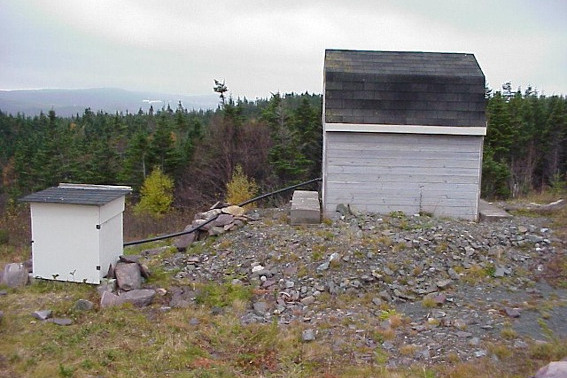 The St. John's Geomagnetic Observatory began operation on 1 August, 1968. A location in southeastern Newfoundland was chosen to reduce one of the largest gaps in the geographical distribution of magnetic observatories in North America. In addition to contributing data for studies of worldwide geomagnetic variations and secular change, the St. John's Observatory provides control for the marine and airborne geomagnetic surveys conducted over the broad continental shelf east of Canada.

The initial St. John's Observatory occupied a site 3 km northeast of the centre of the city, in the White Hills area, and was approximately 1.5 km from the sea. The area is magnetically flat and the total intensityvaried by less than 15 nT within the initial site. A preliminary survey of geomagnetic time variations throughout Newfoundland revealed no gross electromagnetic induction anomalies in the St. John's region but some
coastal induction effect must be expected and has in fact been found.

1968 Observatory: There were two non-magnetic buildings 100 m apart. The site was enclosed by an aluminium fence, segmented to avoid the disruption of the natural earth currents.

One building was used both for the variometers and for absolute observations. It was 13 m long and 6.5 m wide, with the long axis magnetic north-south (1968), and was supported by concrete resting on the bedrock. It was of wooden construction, well insulated and covered with enamelled aluminium siding. Two reinforced and insulated concrete slabs, isolated from the walls of the building and from each other, provided support for theabsolute instrument piers and the fluxgate magnetometer sensor, and for the photographic variometer tables respectively. Two insulated light-tight rooms enclosed the photographic instruments.

The second building, about 8 m square, was of similar non-magnetic construction. It included an office, darkroom and laboratory in which the magnetic field was sufficiently undisturbed to have permitted the operation of many types of magnetometers.

The initial recording instrumentation consisted of a set of standard run RUSKA photographic variometers, a portable ASKANIA photographic variometer and a three component fluxgate magnetometer registering on an analogue paper chart recorder. St. John's was the first Canadian observatory to have a production run AMOS Mk I installed. Routine operation of the AMOS Mk I began in December, 1969

1975 Observatory: Following a decision of the Department of the Environment to construct a new office and laboratory complex, the Newfoundland Environment Institute, on Crown Land previously reserved for the Observatory, an agreement was reached whereby DOE would relocate the recording building 100 to 125 m to the northeast. This would ensure that the recordings of the magnetic variations would not be subject to interference from traffic on the access road leading to the new Institute. A total force survey in August, 1974 revealed no significant field gradients or anomalies within the proposed observatory site. Tenders for a new magnetic observatory building were called in April, 1975. The new building, having the same specifications as the 1968 13 m by 6.5 m building, was completed in December, 1975.

1990 Observatory: Official notification by Public Works Canada (Atlantic Region) to the Earth Physics Branch indicated that the St. John's Observatory site was under considerable pressure for it to be developed for other Federal Government departments. As a result of discussions with Public Works during the summer of 1985, preliminary plans were formulated in order to move St. John's Observatory elsewhere in Newfoundland. A number of prospective sites were examined in the following 3 years but were found to be unsuitable for various reasons. In early 1988 the decision was made to move the Observatory an additional 500+ m back towards the northeast into the undeveloped White Hills Crown Land reserve. Site preparation and building construction were completed by the summer of 1989.

The Observatory presently consists of a scattering of sensor huts and instrument buildings, all separated from each other by at least 30 m. Two 3 m by 5 m buildings of non-magnetic construction house the electronics racks and the absolute observation pier respectively. Five other prefabricated shelters house the various sensors and also serve as additional storage.

Contrary to the usual detrimental effect of new construction on the local avifauna, a biological impact analysis by LeDrew Environmental Management Lt. showed a probable enhanced environment for the migratory snowy owls. Snowy owls nest in the White Hills area from fall to spring. Although the decrease in surface vegetation is probably appreciated by the snowy owls, it is most likely not looked upon with such enthusiasm by the local mice and shrew population.

The third St. John's Observatory was placed in service in January, 1990 with the installation of the Geological Survey of Canada's prototype CANMOS. A fully INTERMAGNET compliant CANMOS was installed in March, 1991.