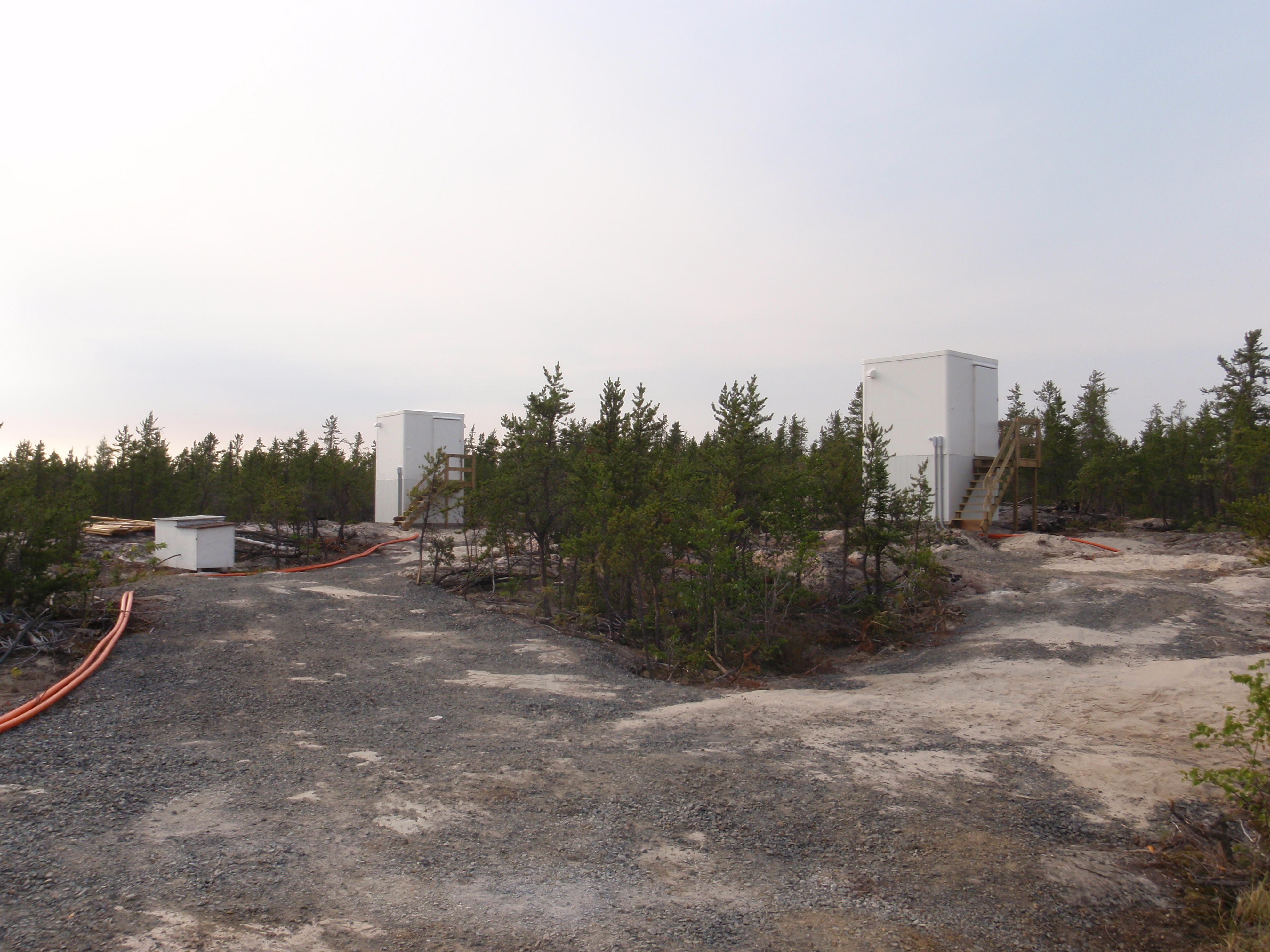 During the International Geophysical Year (IGY) an observatory was in operation at Yellowknife A (July, 1957 to August, 1958) on a site about 2 km from the town and on the south side of the airport road. This site is no longer available.

The decision was made in 1972 to re-establish a magnetic observatory in Yellowknife, N.W.T. In May, 1973 an area in the vicinity of the Seismology Laboratory was investigated for the location of a new magnetic observatory. The site is approximately 6 km northwest of the IGY observatory and is underlain by Archaean gneissic rocks. Two sites were found which were considered suitable: a 185 m square of land lying between the seismic vault and Long Lake, and a site on the south border of the Seismology Laboratory, 198 m above sea level and 390 m south of Long Lake. The first lot was considered more desirable in that the magnetic sensors could be located at greater distance from potential sources of artificial magnetic disturbance. However, it later transpired that the Government of the Northwest Territories had reserved this land as a recreational area for the town of Yellowknife. Accordingly the magnetic observatory was located on the second site, which was approximately 100 m from the Territorial Government Highways Department lot to the east, the golf course parking lot to the west, and the Mackenzie Highway to the south, and 60 m south of the chainlink surrounding the Seismology Laboratory. The average total force gradient measured for the site was 5 nT/m, comparable to that observed previously at the IGY site.

To protect the magnetic environment of the observatory, an aluminium fence was built along the boundary with the Highways Department lot and from this boundary west to the fence along the north end of the Seismology Laboratory compound.

The building, 6 m by 12 m, was of the same construction as Resolute Bay, Cambridge Bay and Baker Lake observatories. The long axis of the building was oriented geographic east- west. All materials used were non-magnetic. Individual piers were eliminated by the use of a reinforced insulated concrete slab isolated from the walls of the building.

By 1986 the site began to experience considerable magnetic interference from heavy road servicing equipment which was occasionally parked in the Department of Highways compound and the from the parking of automobiles for the golf course. As a result, another site was selected which is 170 m west of the new Seismic complex and 100 m south of the Seismic vault. The site is visible from the Geodetic Tripod Bench Mark 39086 which in turn is visible from the Geodetic marker 629102. Accurate geodetic azimuths are then available to the new observatory.

The new observatory, approximately 1 km to the northwest of the previous site, consists of two buildings, each 4.8 m by 2.4 m of non-magnetic construction, and various sensor shelters with dimensions as required. Each construct rests on the exposed bedrock which is available on the site. The sensor enclosures are clustered and separated from each other by some 7 m. The instrument cluster is at a distance of 25 m from the Service Building which houses the electrical service panels and the electronic consoles for the instrumentation. The Absolute Building is at a distance of 27 m and on the side of the Service Building opposite to the sensor array. The new Observatory became operational towards the end of June, 1989.

A digital recording magnetometer, AMOS MK I, was installed in July, 1974. However, there were a number of problems with the digital equipment and reliable digital data did not become available until October, 1974. The aging AMOS Mk I was replaced by the AMOS Mk III towards the end of March, 1982. In turn the AMOS Mk II was replaced by the INTERMAGNET compliant CANMOS in mid-June, 1991.